“Love takes on vitality and substance above all in marriages of those who own nothing or little, because among them, the power of property has disappeared” – Die Gleichheit, 1906

After limited success under Ihrer, Clara Zetkin (1857-1933) became editor of the publication and changed its name to Die Gleichheit (Equality).  The journal covered all topics interesting for working class women as workers, mothers and housewives. It reported about women workers strikes in Germany and abroad, female working conditions, child labor, and the struggle for women’s suffrage.  It aims was to educate its female working-class readers to become passionate socialists and feminist.  Zetkin published regulary articles written by herself in the journal in addition to editing it.  Under Zetkin’s editorship, the journal grew tremendously from 2,000 copies in 1893 to approximately 80,000 copies by 1910. All female member of the Social Democratic Party of Germany (SPD) and the female member of several German free trade unions got a supplement of Die Gleichheit with their membership. Eventually the journal became also the official publication of the international socialist feminist movement, after Zetkin became chairwoman of the International Women’s Conference in 1907.

During its publication Die Gleichheit was a platform for socialist women to connect and communicate with one another.  It kept women informed of the progress being made in socialist feminist movements worldwide, and it also informed them as to what aspects of the movement needed more attention.  Perhaps most significantly, Die Gleichheit allowed for the dissemination of women’s voices, and facilitated agitation among working-class women who might not have had the chance to be heard otherwise.  It also gave its readers the opportunity to learn how to think for themselves, and to do so in a space free from the threat of male ridicule.

Die Gleichheit is still relevant today as a reminder of the legacy of the socialist women’s movement.  The articles and authors featured in the publication place the women’s movement in a much larger social, political, and economic context, and modern feminists would do well to understand the history of the causes they work for.  Additionally, the publication is relevant in a modern context as a model of women’s enterprise.  Although contemporary women work just as hard as their predecessors to further the progress of the women’s movement, Die Gleichheit might also still be useful as a source of inspiration.  It was published during a time when women were not supposed to be outspoken and were not supposed to challenge the longstanding gendered social hierarchy; but they did anyway.  If nothing else, modern women can turn to Die Gleichheit as an example of perseverance in the face of adversity. 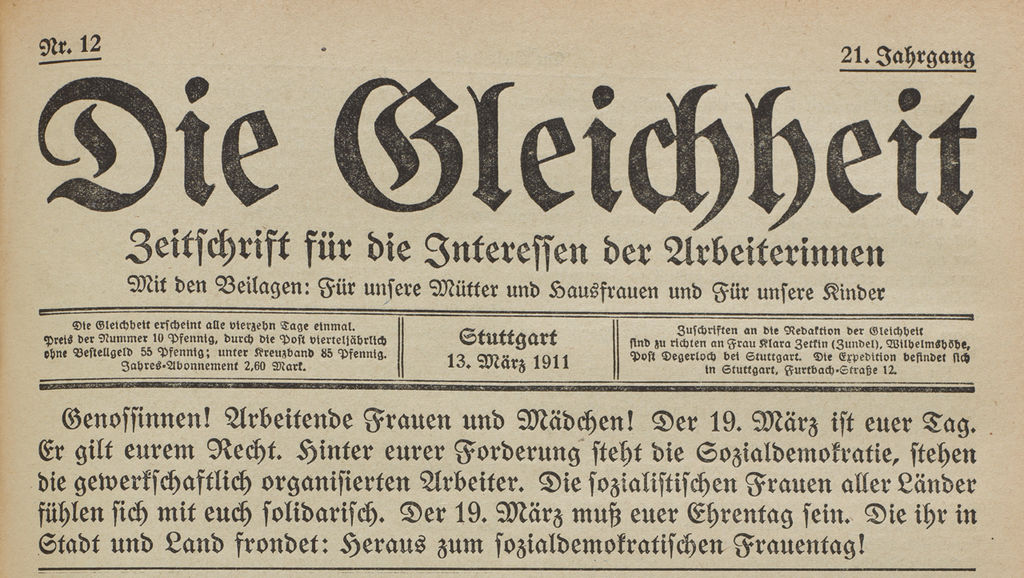