Rosa Luxemburg (1871-1919) was a Marxist theorist, revolutionary leader, and upon her assassination in 1919, an idolized martyr to the international socialist movement. Born in a Poland divided under Russian and German influence, Luxemburg became significant in the revolutionary struggles in both countries. According to those who knew her, Luxemburg was a woman of great warmth, knowledge, and empathy for all walks of life. Despite her criticism of Russian communist revolutionaries Vladimir Lenin (1870-1924) and Leon Trotsky (1879-1940), both still held her in high regard for her vast intellect and revolutionary credentials.

Luxemburg was born in March 1871 to a Jewish family in Zamość in the Russian occupied region of Poland. She was the fifth and youngest child of the timber trader Eliasz Luxemburg and his wife Line Löwenstein. Luxemburg later stated that her father imparted an interest in liberal ideas in her, while her mother was religious, but well-read and instilled a love for reading in her. Growing up, Luxemburg and her other four siblings always knew economic security, as their father was a well-to-do merchant, who provided his children a good education. At home, they spoke Polish, German and Yiddish, later Luxemburg learned Russian too. At the age of 18, in 1889, Luxemburg enrolled at the University of Zurich in Switzerland, where women were allowed to study. She received her doctorate from the university in 1897 in economics with a doctoral thesis titled “The Industrial Development of Poland.”

In Zurich she became increasingly interested in Marxist theory and got  involved in the socialist movement.  In 1893, with Leo Jogiches (1867-1919) and Julian Marchlewski (alias Julius Karski) (1866-1925), Luxemburg founded the newspaper Sprawa Robotnicza (The Workers’ Cause), which opposed the nationalist policies of the Polish Socialist Party. She and Leo Jogiches co-founded the Social Democracy of the Kingdom of Poland and Lithuania party, after merging Congress Poland’s and Lithuania’s social democratic organizations, but they struggled to convince Polish socialists living in an occupied nation from their internationalist approach.

In the fall of 1897, Luxemburg obtained German citizenship through a marriage with a family friend in order to be able to move to legally to Germany and become an active member of the in Social Democratic Party of German (SPD). She wanted to devout her efforts towards the German worker’s movement and impact the German proletariat through her persuasive speech and writing. She first moved to Berlin and since 1898 lived in Dresden, where she became the editor of the Sächsischen Arbeiterzeitung (Workers Newspaper of Saxony). In 1907 she became a teacher at the Party-School of the SPD in Berlin. In the beginning of her political career, Luxemburg did not identify with the women’s movement because she didn’t want to limit her work to women’s rights. Luxemburg believed that only through the liberation of working class men and women would the class struggle succeed.

In 1904, Luxemburg was imprisoned for mocking the indifference of Emperor Kaiser Wilhelm II (1859-1941) to the living and working condition of the working class. When after the turn to the twentieth century  mass working-class insurgencies spread across central and eastern Europe, culminating in the Russian Revolution of 1905, Luxemburg supported the view that capitalism would spontaneously encourage these insurrections and that they should be supported and organized by the socialist movement as its leading organizer. In her book Mass Strike, Political Party, and Trade Unions, published in 1906, Luxemburg insisted that cautious trade union and electoral tactics would never lead to sustained growth of the labor movement. Only through revolutionary socialist acts would permanent gains be secured for the working class.

In 1912, Luxemburg wrote the Accumulation of Capital (Akkumulation des Kapitals), which came out one year later in German. The expansive piece served as an economic analysis of imperialism and described capitalism as an every-growing system or what we now call ‘globalization.’ She saw it intertwined with the rise of militarism and war, which would grow with increasing velocity and violence. As she put it in her work Crisis in the German Social Democracy from 1915, Europe’s dissension into the First World War would force humanity to choose between socialism or barbarism. In the years before World War I, Luxemburg was an ardent agitator for the SPD who warned against militarism, imperialism and war and appealed to the internationalism of the working class, who had no interest in any conflict.

During World War I, Luxemburg was next to  her friend Clara Zetkin (1857-1933), the leader of the German and international social democratic women’s movement, one of the most outspoken critics of the SPD leadership’s policy of a war support. Both  worked for the growth of the opposition against the war inside and outside the party. In August 1914, Luxemburg, along with Karl Liebknecht (1871-1919), Clara Zetkin and Franz Mehring (1846-1919), founded the group Die Internationale, which was renamed Spartakus Gruppe (Spartacus League) in January 1916. They wrote illegal, anti-war pamphlets pseudonymously signed “Spartacus” (after the slave-liberating gladiator who had opposed the Romans). The Spartacus League vehemently rejected the SPD’s war policy and supported the growing number of riots and strikes against the war all over Germany. The Spartacus leaders, including Luxemburg, were imprisoned several times during the war. In April 1917, the Spartacus League joined the newly founded Independent Social Democratic Party of Germany (USPD) under the leadership of Hugo Haase (1863-1919), to give the anti-war position in the workers movement a broader voice. In the Novemberrevolution of 1918, the USPD and the SPD assumed power in the newly created republic upon the abdication of Emperor Wilhelm II. During the revolution, at the age of 48, Rosa Luxemburg and Karl Liebknecht were assassinated in Berlin, as the revolt of the workers lead by the Spartacus League, which wanted to push for a socialist revolution, was being suppressed, by right-wing paramilitary groups Freikorps, which collaborated with the MSPD in the suppressions of the more left-wing revolutionaries  to keep “peace and order” in the newly founded republic.  The Freikorps, systematically rounded up and murdered left-wing activists, including Haase, Jogiches, Liebknecht and Luxemburg.

During her life, Rosa Luxemburg drew respect from those who met her for her eloquent writing, great intellect, views on socialism, and personal warmth. A fatality of revolutionary tides in Germany, she has become idolized in socialist circles. Today, socialists continue to reference her library of works for her detailed commentaries on socialism, capitalism, and imperialism. As the world becomes increasingly globalized through the internet and faster travel, Luxemburg’s beliefs on the spread of capitalism, militarism and imperialism become especially pertinent. 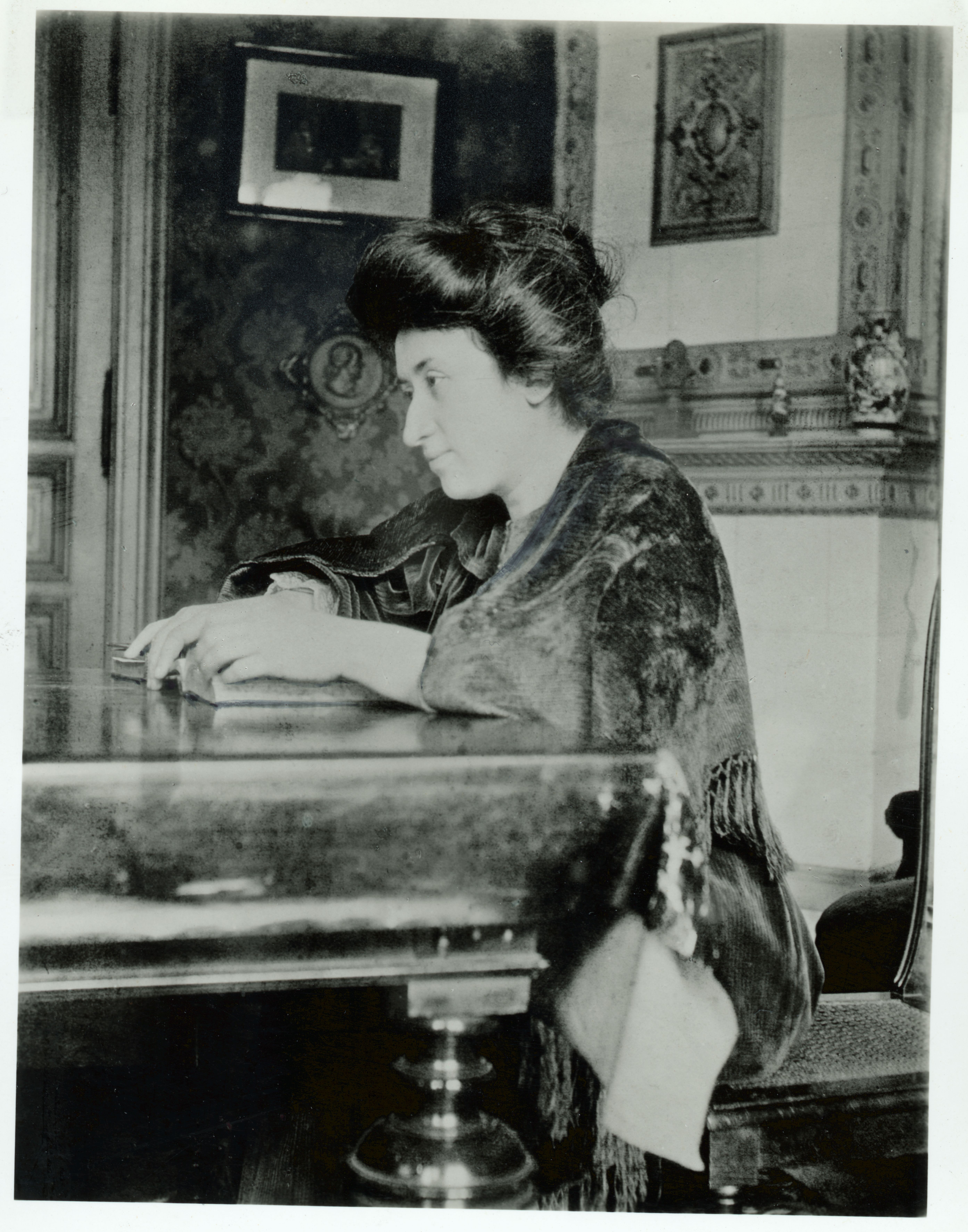 Rose Luxemburg in her Berlin apartment, 1907